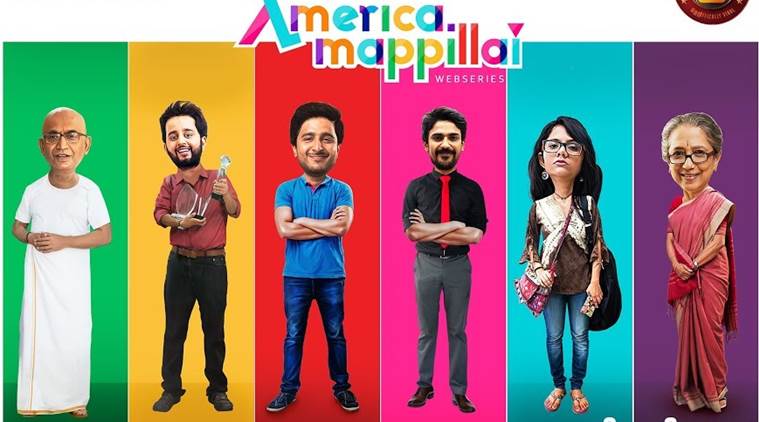 America Mappillai is an unusual web series produced by Trend Loud. Unusual not because we don’t see these stories in real life, but because they’re rarely represented on screen. The 8-part web series, from Zee5 Originals, is about, a young NRI named Ganesh, who is troubled by his single dad to get married. Encouraged by his friend Michael, who acts in melodramatic TV serials, Ganesh decides to tell his father that he is gay. Even as the family struggles to cope with this revelation, there comes a twist in the plot.

Directed by Praveen Padmanabhan, the cast boasts of names like Raja Krishnamoorthy (Kitty) and Leela Samson along with Arjun Chidambaram, Gokul Anand, Namita Krishnamoorthy and Rakesh Ram. Actors like Sruthi Hariharan and Delhi Ganesh play cameos. Each episode is about 10 minutes long and is named after a colour which suggests its theme. Written by Raja Ramamurthy, a full-time screenwriter and filmmaker who currently lives in California, America Mappillai looks at relationships with all their complexity.

Although the series has stock characters like the sister and hero’s ‘useless’ friend, it also includes some fresh ones – like a single dad who cooks meals for his children as a matter of routine, and an elderly woman who’d decided never to get married by choice. This series challenge stereotypes since the show is all about subverting stereotypes. But it also informs the audiences about the dad – that he is a self-made man and how much he cares for his kids. We rarely get to see such families in Indian cinema, but we see them a lot in real life and this is showcased in the series.

America Mappillai handles the gay identity with care, without turning the characters into needy and unstable people as has been the routine in mainstream Tamil cinema. The character of Karthik, Ganesh’s friend, who is out as a gay man, is free of the usual “effeminate” characteristics that have been dumped on gay characters on screen. Further, he treats himself with self-respect and makes it clear that he isn’t looking for anyone’s sympathy. While writers are never asked why they chose to write about a heterosexual couple, the question inevitably arises when it is a gay relationship. The curiosity lies in trying to ascertain if the creator is also gay.

To this accusation, the makers were surprised the first time it was brought up and it has happened a lot more since then. But they consider this a win. For them, it means that they got the story and the characters right. According to them, you don’t have to be a serial killer to write about one, it’s the same logic.

Though America Mappillai isn’t bitingly funny, the scenes remain light and real. In the web series format, it’s hard to sketch characters and establish empathy for them, given how little time there is at hand. Some like Sunanda, the sister, remain underdeveloped, while others like Karthik, are shaped better. Although the series takes on the Indian obsession with marriage and all its accompanying prejudices, it is silent on the issue of caste which comes to the forefront in such discussions. From the dialect spoken by the characters on screen, it appears that America Mappillai is about a Brahmin family.

On this exclusion the makers commented that they never dealt with caste because in all honesty it’s a moot point in this situation. As per their understanding, the family wouldn’t care about caste or religion when their son brings home a boy and tells them that he loves him even if he is from the same caste. In our society homophobia goes beyond caste and religion and the show reflects that.

The web series format is still at an exploratory stage but it nevertheless offers opportunities for such original content to be showcased. Speaking about his experience on working on the show, Raja says, “The journey started in 2016. I’d be lying if I said it was smooth sailing from the get-go. It has been an uphill battle, but it has also been a great learning experience. With the advent of OTT platforms, it has become a gateway to bringing such projects to life with ease. He adds that Zee5 loved the idea and immediately came on board. The experience has been fruitful since I got to work to with a great cast and crew. These types of stories need more mainstream media representation and I’m glad to be taking a step in that direction,” he concludes.

So download Zee5 and watch this super fun show now!