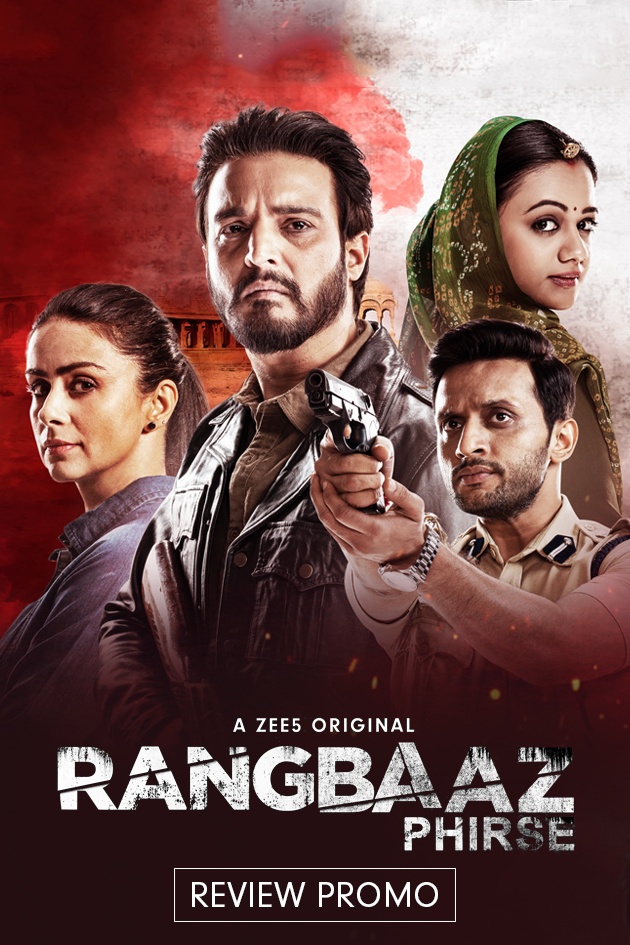 Summary: Rangbaaz Phirse tells the story of Amarpal Singh, a virtuous student in Rajasthan who is turned into a ruthless gangster by the persisting caste politics and oppression by people in power.

If you have a thing for gangster drama, then you have a reason to rejoice. The second season of the popular ZEE5 web-series Rangbaaz is back, and this time the plot has moved from the rustic background of Gorakhpur to the colourful streets of Rajasthan. While the original series was aired in 2018 and was based on a true story of notorious wanted criminal of Gorakhpur, Shri Prakash Shukla, Rangbaaz Phirse is a biopic of a gangster Anandpal Singh. The main lead is being portrayed by the talented actor Jimmy Sheirgill. The first episode was aired on 20th December 2019 and has already created quite a buzz amongst crime drama lovers. Read this Rangbaaz Phirse review to gain a sneak peek at the characters and the plot setting.

A talented star cast doing justice to their roles

Jimmy Sheirgill may not have made it big on the silver screen but he is certainly stealing the “show” (pun intended!) with his incredible performance in Rangbaaz Phirse. Sharad Kelkar is nowhere lagging behind and has already caught our attention with his impeccable performance. The show promises to expose the ugly relationship between crime and murky politics. Be sure to watch Rangbaaz Phirse review online to understand why this show has been getting all the applause.

The story is based in Nagaur, Rajasthan where gang war and old enmities have created nothing but chaos. Amarpal, a Rajput by caste and a UPSC aspirant leaves the path of righteousness after being falsely accused of being a criminal. Amarpal and his friend (Sushant Singh) pick fight after fights to destroy the empire of liquor mafia (Sharad Kelkar). They later establish their own empire, and what follows is a gruesome situation on both sides. Some interested cops, politicians, and bystanders also join in to serve their own personal agenda. Bodies pile up on both sides and the plot reveals that mafia or politics, men can be easily bought and sold.

The well-chosen cast has done justice to their roles. Zeeshan is impressive in his role as a cunning IPS officer. His style of adding punch with idioms creates an air of mystery around his character. Sharad portrays his character effortlessly as if he was born to play it. Spruha Joshi plays a doting housewife who dares not leave her husband’s side despite him becoming a criminal. Gul Panag does not fail to make her presence felt in her small yet impactful role.

Rangbaaz Phirse takes you through the rural heartlands that are plagued by caste hierarchy. This fast-paced thriller has nine episodes in total. The plot is set in Rajasthan but has been shot extensively in Bhopal. The series has been written by Siddharth Mishra who also wrote the script for Season 1. This is the first web series in which Jimmy is seen essaying the lead role.

Rangbaaz Phirse has been thoroughly planned and depicted. Minute details have been taken into consideration to tell the tale of the transformation of soft-spoken Amarpal into a gangster with prize money of 10 lakhs for his capture. His metamorphosis comes off as spectacular and sharp. Amarpal becomes unstoppable after entering the world of crime. The plot unmasks caste politics that is still widespread in the region and the country. Shrewd politicians pit people from different communities against each other to instigate bloodshed, mayhem and violence.

What sets the series apart?

The emotional play in this story is what renders it unique. The transformation of Amarpal from being a good man into someone yearning for revenge takes you on an emotional ride. The last episode is quite intense and you may end up shedding tears in the end. This drama has been masterfully made. The story is bound to remain in your heart even after you have finished watching the series. Rangbaaz Phirse is much more than a tale of rise and fall of a criminal. It brings out vulnerabilities, insecurities, caste wars, and the modus operandi of greedy politicians who laugh their way to the top.

The edgy background music also adds strength to the script. This narrative is based on a true story just like the first season which was based on a famous gangster of Gorakhpur. The series successfully captures all the finer details with meticulousness which adds further depth to the story and characters. The stellar direction and writing do make it a masterpiece for the small screen. Even if you missed the first season, this crime drama is a must-watch!