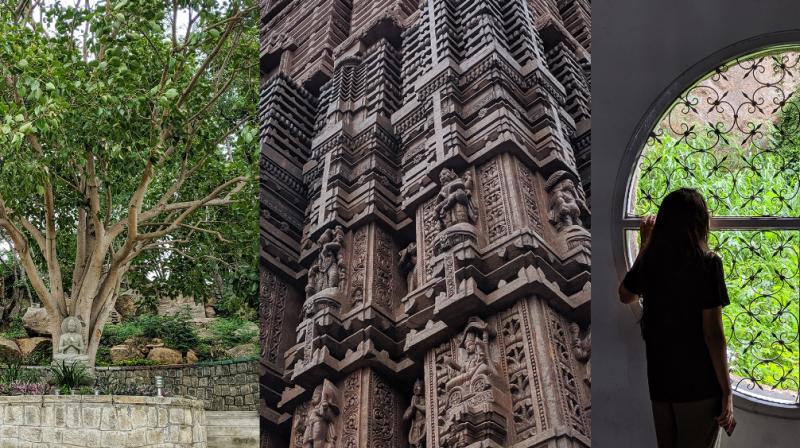 Have you ever walked around your own city as if you were a tourist? Meet Pranitha Ravi, a veteran traveler and a pukka Hyderabadi. Pranita had never done it before. In fact, whenever she was in the mood to be a tourist, she packed her bags and left Hyderabad to explore other cultures and cities, to enjoy their heritage and food. She had rafted and surfed in Mulki, climbed the hills of Tosh, partied in Goa, seen sunsets in Jaisalmer and taken an endless number of flights, trains and buses for various experiences across the country. But never did she imagine that exploring her own town would be one of the most satisfying experiences for her as a traveler.

It all began with an email from Savaari Car Rentals, who proposed a two-day “Hyderabad Darshan” wherein Pranitha would be joined by two other Instagram bloggers from Hyderabad. Their idea was to bring together three people with different perspectives of the city to curate an experience that would give them all something new to take home.

Vaibhav, Vidya and Pranitha almost immediately agreed to take the tour with Savaari Car Rentals in Hyderabad. And after almost a month of working towards a common schedule to suit all three, they finally set out on the trip. And it can be said with a fair bit of confidence that all three ended the journey quite enriched with new knowledge of the city, which was the main intention behind throwing them together in a car.

When the bloggers made a list of places to visit and eat, they were quite overwhelmed by the number of things they were trying to do! A team from Savaari helped them chalk out an itinerary and even convinced them to let go off a few stops. But “We won’t have enough time” was the common notion they carried all through, even on the day the trip began. But not only did they finish things as per the plan, but also ended their days so quickly that they had to wait a few hours for dinner.

Apart from being a traveler, writer and all-around nice person, Pranitha is an avid history enthusiast and has been part of quite a few heritage walks in Hyderabad. She could have never anticipated that the stuff she learned out of interest and curiosity would help her become a tourist cum tour guide in her own city! When on the first day the bloggers stopped at the Buddha Statue, St Joseph’s Cathedral, Koti Women’s College and Chowmohalla Palace (in the same order, stopping only to eat and snack in between), Pranitha realized that she had a very enthusiastic and inquisitive company; which was what made the entire experience worth the while.

Fun facts for those who do not know – Buddha Statue is the world’s tallest monolithic statue of Buddha standing at a height of 58 feet; Koti Women’s College was the British Residency back in the day and is home to the famous love story of Khair-un-Nisa and James Kirkpatrick which is chronicled in well-known writer William Dalrymple’s The White Mughal; Vaibhav shared this interesting ‘buzz’ about how the cross atop the St Joseph’s Cathedral is believed to be a little tilted because V.V.S. Lakshman hit a massive shot when he was playing in his younger days!

Moving on, Vaibhav’s knowledge about food made so much of a difference. The trio ended the first day at Hameedi Confectioners which holds the recipe of a 100-year-old dessert called Jauzi Ka Halwa, known to be the Nizam’s favorite! Through the day, the bloggers made stops at Bawarchi for the mandatory biryani lunch and for chai and biscuits at the Nimrah Café that overlooks the mighty Charminar. After all, what’s a true blue Hyderabadi experience without these two?

The savior through the tour surely was Mustafa bhai, the chauffer designated by Savaari. Pranitha recalls calling him on the second day just as he was about to start for her pickup to tell him that the three needed some extra sleep, and he came on the dot, without a minute’s delay!

Day 2 seemed quite hectic with a lot on the schedule but the record time at which the trio ended is pretty shocking. After a very hearty breakfast at Ofen, which was chosen solely because the bloggers wanted a taste of Hyderabadi continental breakfast after the yummy idly and dosas at Rambharose the previous day, they went to the Sri Jagannadh Temple. It’s surprising how despite having driven across this place so many times, none of the three had ever walked in to appreciate its beauty even once.

Pranitha revisited the same thought when the car eventually reached the Qutub Shahi Tombs and Taramati Baradari, driving across the Golconda. So much history was traversed in no time! The day seemed to move extra slow as the three spent a long while admiring the beauty of these places and their history. But hunger always calls and that’s when they unanimously decided to have the biggest meal of the two days at The Spicy Venue – a South Indian thali and the famous Apricot Delight. A minute ought to be taken to appreciate Vidya’s passion for food! The world has never witnessed such devotion- savoring every morsel of food with a gentle smile playing upon her face!

It can get difficult to even move after a meal like that but there were still places to see and things to do. The trio drove straight to make stops at Spanish Mosque and then Buddha Vihar. The latter was the perfect way to end the day – a serene and beautiful spot at a secluded area in the city, they meditated, watched little monks play football and got the best view of Hyderabad!

As they stuffed themselves with the Tawa Burger at Shalimar Tiffins in Ranigunj they were glad and thankful that the tiring two days came to an end. One can be a tourist anywhere in the world but being a tourist in one’s own city gives a new perspective, and it is surprising to realize how little one probably knows about the city they call home. To conclude with Pranitha’s words, “And this is an experience I’ll keep giving myself as often as possible. After all, could two days be enough to explore a city like mine?”